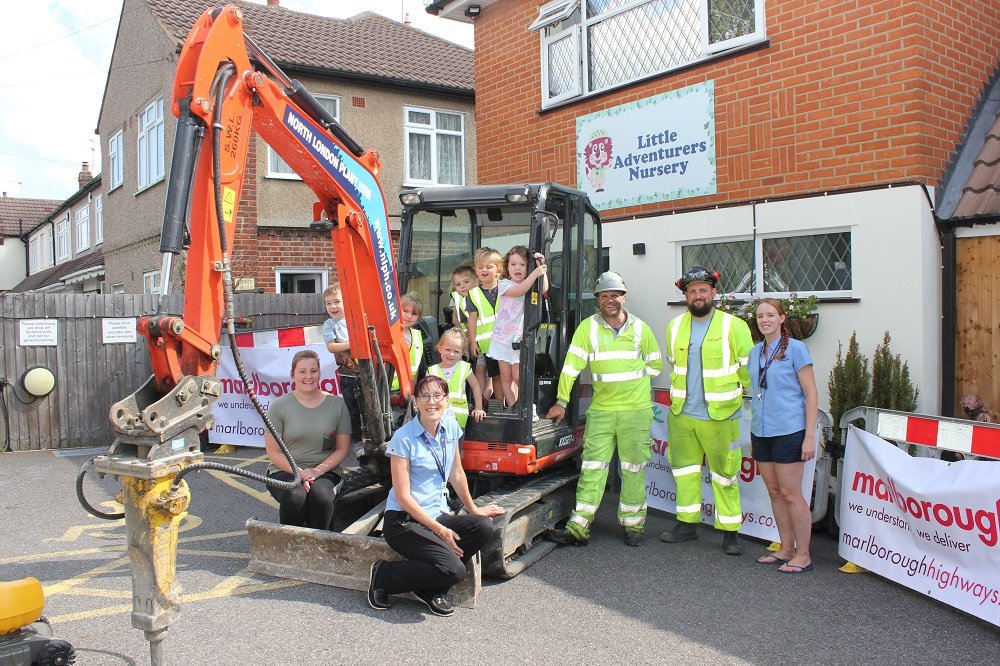 Nursery pupils from Little Adventures Nursery, Upminster had an opportunity to investigate a digger up close thanks to Marlborough Highways.  Under full supervision, and in small groups, the children had a chance to sit on the digger and learn all about how it works from Marlborough’s Foreman, George Schintee and Supervisor, Dan Kennett.

As the Little Adventure nursery pupils and staff go on their daily outings, they have been passing the footway improvement works with interest, and always stop and look at the digger in action.

Marlborough finally got to the stage where they were working directly outside the nursery and the children were overjoyed when Marlborough took some time out to bring the digger into the nursery’s car park, so the children could investigate it close up.

Ginny Andreas, Manager of Little Adventures Nursery commented “Having watched the men replacing the pavements recently outside Little Adventurers Nursery, imagine our delight when a digger came into our car park! The children loved sitting on it and they excitedly talked about it for ages afterwards. They even made their own digger with cardboard boxes later in the day, with pedals, controls and a breaker on the bottom of the hydraulic arm! So much fun and learning involved!”

Grabbing some time with Southend’s Youth Group
August 27, 2021
Wacker Neuson’s Zero Emission Range Trial
July 23, 2021
Arrival of seven new trucks to support our Southend Contract
July 22, 2021
Broomfield Hospital Cycle Scheme gets underway
July 20, 2021
Cutting Cube Trial
July 15, 2021
“One of the things I value most is their very collaborative and transparent team culture. It makes a big difference to have a contractor who wants to work closely with us and is supportive and responsive. With Marlborough, I get a team who are attentive, work collaboratively and honestly with me and don’t lose focus on delivering first class communications and compliance.”
Carly Norris, Project Manager Operations, London Borough of Hackney
“One of the bonuses of working with Marlborough is they have their own, huge workforce of multi-skilled teams. That means we get the same 2 gangs understanding the job from start to finish and they understand the requirements and what it takes to get the job done”.
Graham Nicholls, Senior Project Manager, London Borough of Barking and Dagenham
“Marlborough attracts people who take care and have pride in their work. Several gangs of Operatives worked tirelessly for 6 months to reconstruct drainage networks, lay more than 3km of high quality bespoke granite kerbs and granite channels blocks to ensure positive drainage. The technical compliance, attention to detail and level of quality finish along the entire carriageway was exceptional”.
Mark Chiverrell, Technical Director Project Centre
“Once the cliff stabilisation project got underway there were a few unexpected challenges that required revisiting structural plans, coordinating material sourcing, supply and fit very quickly. Our Project Manager, took a proactive lead, improvised and didn’t sit back.”
Richard Atkins, Sea Defence Engineer, Southend-on-Sea Borough Council
“It’s really nice to work with main contractor, who can work side-by-side and together as one team with suppliers, other contractors and providers. Marlborough’s way of working means we do not get many resident complaints.”
Richard Backhouse, Street Light Engineer, Southend-on-Sea Borough Council
“It was great to work with Marlborough again on another scheme which brings benefits to the local community.  The site team worked tirelessly, during the height of the pandemic, to deliver these key improvements in challenging circumstances.  Marlborough was flexible throughout, accommodating major utility works and amending their method of work which resulted in cost and programme savings to the project.  We would like to thank Marlborough for delivering the Ferry Lane project within budget and ahead of the programme."
Tracey McGovern, Consultant Project Manager at Haringey Council
“We saw huge benefits in appointing Marlborough as our full service contractor and we’re impressed – they’ve delivered consistent high quality service and superior quality control across every project. Marlborough, provide us with a ‘one-stop’ shop solution – we get the same quality of service and better control across all aspects of the project.”
Darren Bryant, Principal Engineer, London Borough of Enfield
“Over the last 25 years, I’ve worked with a lot of different contractors and Marlborough is one of the few companies that are passionate about delivery. With Marlborough we get one team, with the perfect blend of skills and experience: established gangs, proactive Project Managers and fully engaged Operations and Senior Directors. Time after time, Marlborough has proved themselves to us and pulled out all the stops to get the job done."
Rob Wybrow Construction Manager, Be First on behalf of Barking and Dagenham Council

Please see our privacy notice for more information on how Marlborough Highways Ltd take care of your details.

Marlborough Highways are excited to announce the c

Here at Marlborough Highways, we are proud to be a

Nature is all around us, even where we are at work